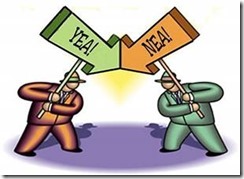 The cross-examination period reflected the relative experience between the two debaters. Dr. Stratton’s questions were accompanied with many statement and explanations prior to the question which did not make the issues clear, such as the suggestion that God’s middle knowledge comes from the fact that God is “the perfect standard of power and knowledge.” Dr. White is the more seasoned debater. When putting questions to Stratton, he returned to the assertion that middle knowledge delimited God’s decree and the world that He could create, thus denying God’s freedom. He never made a Biblical case for this assertion. The cross-examination could have been more focused on the part of both interlocutors.

It was during the cross-examination period that Tim Stratton made his strangest analogy, an illustration from one of the Avengers movies. He attempted to move James White into accepting exhaustive determinism. However, the illustration was not very understandable especially to those, like myself, who had never seen the particular movie in question. Analogies must be understandable to all. The Avengers analogy did not contribute to Stratton’s point.

A question and answer period in a setting like this can either produce heat or light on the subject at hand. The second question of the night was directed at Dr. White and focused on I Corinthians 10:13, which had been brought up during Dr. Stratton’s presentation. How could one read this verse and not conclude that some libertarian freedom is present in people? Dr. White’s answer provided no exegesis of the verse to show the opposite of Dr. Stratton’s contention. On the contrary, White’s short answer was a work of obfuscation on the issue. Stratton’s rejoinder was modest in that “sometimes humans have libertarian freedom.”

The penultimate question of the night went to Tim Stratton. “Does Molinism hold to the self-sufficiency of God? If so, how is God self-sufficient if subjunctive conditionals are a prerequisite to the decree of God?” This question from the audience attempted to separate the knowledge of subjunctive conditionals from God Himself. Stratton did affirm the aseity, or self-sufficiency, of God. However, the question presented the opportunity to dispose of the grounding objection about the foundation of middle knowledge. Molinism affirms that God’s middle knowledge is grounded in His omniscience and not in some other outside source. Instead of making short work of this objection, Stratton suggested again that God could not make a creature with libertarian freedom and then causally determine that creature’s actions. It was a muddled, but theologically correct answer.

Tim Stratton had more of the burden of proof in asserting that Molinism was, in fact, Biblical. He used texts from both Testaments to show that people do, at least in part, have libertarian freedom. Middle knowledge, rather than determinism, better explains the existence of creatures with such freedom. Dr. Stratton’s organization of his first presentation and his actions throughout the debate showed his inexperience in formal debate, a set of skills on which he can improve. Stratton was obviously excited to participate in a debate with a seasoned debater such as White and it showed in his presentation and exchanges.

James White, in suggesting the negative case, should have had an easier time in the debate. However, after having seen several of Dr. White’s debates (and profited by them), I expected more from him. White promised Biblical exegesis, but it was lacking in all his presentations. Penetrating cross-examination was lacking on his part. It seems as though James White was unfamiliar with the nuances of Molinism as evidenced by his use of the grounding objection (without calling it that). The grounding objection has been answered in the literature, something that White seemed unfamiliar with. I was especially disturbed by his use of the genetic fallacy when he stated that Molina, being a Jesuit, was attempting to undermine the Reformation by devising the system which now bears his name.

As Dr. Stratton asserted, unbelievers were watching this debate. But, believers were watching as well. As someone who is sympathetic to the system of Molinism, I found the debate to be informative but I wanted more from both participants. Better organization was needed from Tim Stratton and a more robust opposing case was required from James White. This debate should spark a needed discussion in the church about Molinism as a viable alternative to Calvinism.